The history of the first gas balloon 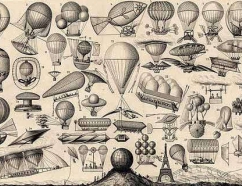 Jacques Alexandre Cesar Charles was a French chemist, physicist and aeronaut who was born on November 12, 1746 in Beaugency, on the banks of the Loire River. His education had little to do with science and his first job was at the Ministry of Finance in Paris.

In 1779, Benjamin Franklin visited Paris as ambassador of the United States of America and Charles was so attracted by his scientific experiments that he became interested in experimental physics. After only a year and a half of studies he was already giving lectures on this subject, which helped popularize Franklin's theory of electricity. But what really happened to history is to invent the hydrogen balloon. Hydrogen gas was discovered a few years earlier by Cavendish.

Charles developed his invention after the Montgolfier brothers managed to raise a balloon with hot air inside it. He used a silk bag covered with rubber so that the gas did not escape. Hydrogen was obtained by the action of sulfuric acid on iron filings.

On August 27, 1783 the balloon managed to rise about 900 meters and fly for 45 minutes to land 24 km away. When landed, the frightened peasants thought it was a kind of monster from the sky and destroyed the device. That same year, on December 1, 1783 Charles himself made his first ascent from the Plaza de las Tullerias, accompanied by Ainé Robert. The balloon, which was larger and known as Charlière, rose to 549 meters. Several improvements were made to the apparatus such as a wicker basket for the crew and to place a valve for the descent "

After the success achieved, King Louis XVI gave him in the Louvre the space and the necessary means to install a laboratory where he studied the dilatability of gases and enunciated the law that bears his name, according to which, at constant pressure, the volume of a perfect gas is directly proportional to its absolute temperature. The results were published in 1802 and were known as Charles's Law and Gay-Lussac. In 1795 he was appointed member of the French Academy of Sciences and shortly afterwards professor of physics at the University of Paris.

Send us a message, we will inform you of everything you need.

Message sent
We have received your message correctly. Soon we will contact you through the information you have provided.