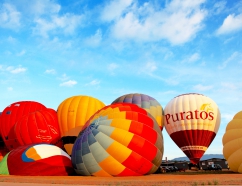 Since the beginning of the industrial revolution ingenious machines have been created that have attracted the attention of a large number of people from all over the world, either for their designs or for their operation, what is certain is that the balloon festivals form Part of a series of annual events that take place in certain countries, and then we'll talk a little about one of the biggest events in Europe and the world.

Throughout the world, and throughout the years, a great number of festivals and celebrations have been held alluding to the manufacture and admiration of hot air balloons, an issue that has gained some importance in the last decade, especially since it is a Way to enter into broad social relations and share ideas and opinions on this passion that attracts many people from all over the globe. There are dozens of activities and dynamics that seek to encourage the development and participation of the community to strengthen the ties that the organizers have tried to impart in endless opportunities in recent years.

European Balloon Festival, is characterized by being the largest meeting and concentration in Spain and southern Europe, marking steps and distances as a leader in events of this nature every year since its creation in 1997, and that until now, Has had a faithful audience and subject to the values for which the festival was founded from the beginning. This event is held in the first fifteen days of July in the region of Igualada and serves as a meeting point from Thursday to Sunday for an approximate 26,000 spectators from all regions of the world and more than 45 hot air balloons from different points of the regions of Spain, Europe and the world. In addition to having balloon flight services in Barcelona, which are available to interested parties.

This balloon festival is defined as the epitome where dozens of pilots are gathered to appreciate the majesty, beauty and complexity of this discipline that throughout its community has been welcomed as a sport, where a full day's journey ends with the famous Night Glow, whose event takes the night as a stage to illuminate the Spanish skies with the designs of the different ships. During the development of the whole day, any visitor can enjoy many activities that are scheduled during the ensuing days, among them, climb balloons as part of a tradition for visitors, where you can enjoy balloon rides along with the Teams that participate in the organization of the event, among other interesting dynamics directed towards all ages. All competition or exhibition flights are carried out in the early hours of the morning and late in the afternoon, due to the fact that the weather conditions and climates are more suitable for flights in general, in this way, Directly avoid any misfortune, but nevertheless, they are always complied with safety measures based on laws, regulations and regulations, not only imparted in the event, but also outside this from a legal point of view, thus forging a better coexistence between visitors and organizers in general.

Send us a message, we will inform you of everything you need.

Message sent
We have received your message correctly. Soon we will contact you through the information you have provided.